Our body is a “universal tool” for insight into the manifold realities we live in and for a direct experience into the living “information network” of consciousness.
Rhythmic stimulation of the human body combined with ritual body postures can produce a profound change in consciousness, enabling one to experience different areas of the alternate reality.
Ritual body postures found in prehistoric cave paintings and indigenous effigies have their origins with the hunter-gatherer tribes. The oldest posture discovered to date is believed to be approximately 32,000 years old. It was in the horticulturalist societies that followed, however, that the practice of these postures flourished.

Prof. Dr. Felicitas D. Goodman (1914-2005), was a highly regarded expert in linguistics and anthropology and had researched and explored ritual body postures for many years. She is the author of such well-received books as Speaking in Tongues and Where the Spirits Ride the Wind: Trance Journeys and Other Ecstatic Experiences.

Dr. Goodman and many people of the Cuyamungue-Institute (USA) and the Felicitas-Goodman-Institut (Germany) have collaborated in researching the effects of eighty different ritual body postures. Each body posture can lead into the alternate reality – or a different field of consciousness – when performed in conjunction with the proper rhythmic accompaniment of ca. 210 beats per minute.

The finding of the effects or the ritual body postures started with Dr. Goodman’s research in the 1960ies on glossolalia (speaking in tongues). This technique as a component of religious trance rituals led her to wonder whether it was possible to achieve the bodily changes of a religious trance experience without the accompanying changes in speech. With her university students as test subjects, she employed some of the methods (e.g., rhythmic stimulation) that she had observed were trance inducers in her earlier research in apostolic churches in Mexico. Although her students reported success in achieving “an altered state of consciousness,” Dr. Goodman was disappointed with the noticeable lack of common ground of the experiences. Shortly thereafter, she hit upon the missing ingredient that would give unity to religious trance experiences. After learning that the posture of the body in meditation practices could cause certain physiological changes, Dr. Goodman searched for postures that she could use in her trance research. She found what she was looking for in pictures and illustrations of small statues and cave art that were thousands of years old and that probably represented self-contained religious rituals. In practicing some of these body postures with volunteers and using a rattle as the rhythmic stimulus to induce trance, Dr. Goodman observed that their state of consciousness was altered in a remarkable way; that is, they entered a trance-state that provided a gateway into the alternate reality, where they experienced ecstasy. The rattle’s or drum’s 210 beats-per-minute rhythm helps to break through a strategic barrier of the nervous system and achieve a changed state of consciousness, one that allows a trance experience, including visions. The saying “He who sees only with his eyes sees only the shadows of the world” reflects a wisdom that is deeply anchored in many indigenous cultures.

Most of the investigated trance postures come from the hunter-gatherers and the horticulturalists. These societies did not separate “ordinary reality” from “non-ordinary reality” as we do today. The trance state was socially acknowledged and accepted as a method of balancing body, mind, and soul and of bringing back into harmony that which had caused dissonance.

Body postures that lead to a trance state are still being practiced in societies that are rooted in the horticulturalist tradition. In anthropologist Erika Bourguignon’s comparative study (1973) of 488 societies around the world, 437 (or 90 percent) were found to use at least one culturally institutionalized method to experience an altered state of consciousness. The Hatha-Yoga asanas also have their roots in the ritual body postures of shamanic cultures.

This alone is not sufficient to explain why that in spite of all changes of the form of society, language and culture the knowledge of shamanic practises and the interest at these methods did not vanish. How comes that in our time which is full of stimulations of the senses and has all kinds of self experience practices more and more people are looking for the shamanic experience and techniques? Why do people search for the experience of not visible worlds of consciousness, looking for the experience of flying without having wings, changing form and getting insights by their own experience and not only by faith? Don’t we have enough possibilities of “real” travelling and flying to open up for lots of experiences? 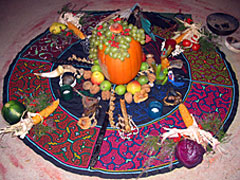 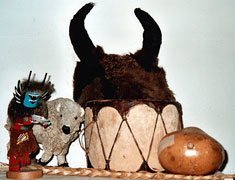 Shamanic rituals have the potential to act in a way that events you cannot control get into a healing order and coherence.
Shamanic Rituals are rituals in a community of people. A ritual community is able to bundle the spiritual power with conscious acting in an intensive way.
Dividing and exchanging of experience and insight is a strengthening principle for oneself and the community in shamanic worlds.
Ritual words, sounds, gestures are intentionally used and effectual elements of shamanic rituals.
These actions express the intention to enter spiritual fields with the help of the senses and open up for the meeting of spiritual powers.
Rituals support the transformation of thoughts and feelings.
They express the promise, that what will happen is intentional.
The conducting person in a shamanic ritual is not a deputy or agent of a higher power, but she works in a state of higher perception as a conscious part of the original spirit, with which she affects the field.
The spiritual power of the ritual is able to develop a healingsome effect independent of the sound of ritual words or songs. But without being in tune with the spiritual power words, sounds or gestures don’t have an effect.

Rhythmic stimulation of your body, combined with ritual body postures, can produce a profound change in consciousness, enabling you to experience different areas of the alternate reality.

The type of trance investigated by the anthropologist Dr. Felicitas D. Goodman is produced by a rhythmical stimulation by gourd-rattles or drums beating at a rate of 210 beats per minute.

In the course of scientific investigation of the changes occurring in combination with ritual body postures it was found that the neurotransmitters accompanying stress, such as Adrenalin, Noradrenalin and Cortisol tend to decrease, while simultaneously the brain releases the body’s own opiates, called Beta-Endorphins, into the bloodstream. 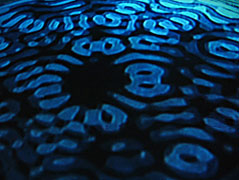 EEG-Tracings carried out simultaneously indicate the appearance of Theta waves (4-7 cps) and a remarkable increase in the pulse-rate with concomitant drop of blood pressure.

Rhythmic stimulation in combination with ritual body postures produce a changing consciousness, leading into spaces of varying content of the alternate reality.

Dr. Goodman and her collaborators researched the effect of close of 80 different such ritual body postures. The postures were discovered in rock-art and effigies.

Such postures were apparently first discovered by the hunters and gatherers. However, the experience most extends flourishing among the horticulturists.

The oldest one of the postures discovered to date is about 32.000 years.

The body postures in combination with rhythmic stimulation will lead not only to changes in somatic perceptions, but also to visions, i.e. the ecstatic experience. The body postures themselves do not constitute any believe-system, no dogma. Rather they are part and parcel of a shamanistic world-view.

The ecstatic trance is part of our genetic endowment. „Rituals“ energize, harmonize, and potentate the access to ones own creativity.

Research into the biochemical changes in the body and the neurological changes in the brain during and after purposefully induced trance point to the conclusion that different induction methods activate different areas of the body and the brain. These trance states generate longer-lasting feelings of euphoria, joy, and clarity as well as the certainty of being sheltered in the connectedness of all things.

To enter repeatedly and purposefully into a state of trance and to tune in to a different field of consciousness produces changes due not only to biochemical processes within the body. The experience of these feelings must have an effect on the unfolding of one’s own being without being connected to conditions, demands, and dependency.

Trance – Contact with the true realityThe experience of a different field of consciousness that constantly creates itself anew leads to insights and points of view that influence concepts, judgments, thinking, and acting in the mundane world and that alter priorities in dealing with humans, the living environment, and the material world. No wonder that humans of all times and cultures searched for ways to attain these states!

Based on the work of today’s shamans, one can assume that long before the brain and its activity drew the attention of researchers, people who were well acquainted with entering different fields of consciousness had discovered that it is possible through “precise navigation” to reach a certain part of the field. Experienced shamans have something like maps of the other worlds. Thus, they can communicate among each other (e.g., as to where they have to go to achieve certain things). 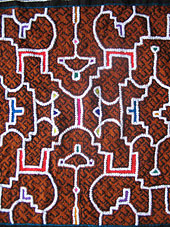 The journeying of shamans into the other worlds of consciousness demands long practice in order to find their way and to work once they get to where they’re going. Brain researchers have established that particular areas of the brain are more pronounced in people in certain professions. For example, taxi drivers in big cities have up to 30 percent more nerve cells in the area of the brain where the layout of streets (i.e., maps) is stored. Presumably, the case is the same with shamans, only their increased storage capacity is due to maps of the worlds of consciousness!

If brain researchers were to measure the neurophysiological changes that occur in shamans during their journeys into the other worlds, the readings would certainly substantiate their altered state of consciousness, thus “proving” it to be true.

“In my opinion, it is enough to know the individual steps of the trance process. Ultimately, this is more important than theoretical, uncertain definitions that are justified merely by scientific need.” —
Dr. Amelie Schenk, 1994

Proof is nothing but an altered vibrational field of brain waves interpreted according to the contemporary scientific meaning or the world view of the measuring researcher. Physiological changes in the brain can merely indicate which sender in the field of consciousness the receiver is tuned into. Even models of explanation for the events in shamanic trance states that are oriented in tribal history, psychology, rebirth, or prior lives cannot grasp, in my opinion, the core of what happens in a trance. What are these events? There is only one way to find out, and that is to come into contact with the true reality, to enter into the experience of a purposeful trance!

Thank you for your interest in my work and website!
I welcome your comments and feedback.
Please contact me if you have any questions or need further information.